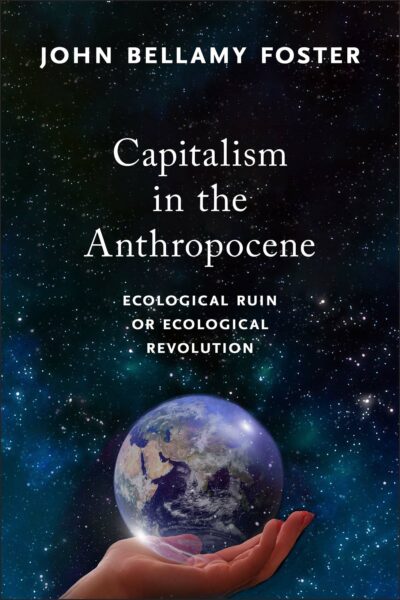 Over the last 11,700 years, during which human civilization developed, the earth has existed within what geologists refer to as the Holocene Epoch. Now science is telling us that the Holocene Epoch in the geological time scale ended, replaced by the onset of a new, more dangerous Anthropocene Epoch, which began around 1950. The Anthropocene Epoch is characterized by an “anthropogenic rift” in the biological cycles of the Earth System, marking a changed reality in which human activities are now the main geological force impacting the earth as a whole, generating at the same time an existential crisis for the world’s population.

What caused this massive shift in the history of the earth? In this comprehensive study, John Bellamy Foster tells us that a globalized system of capital accumulation has induced humanity to foul its own nest. The result is a planetary emergency that threatens all present and future generations, throwing into question the continuation of civilization and ultimately the very survival of humanity itself. Only by addressing the social aspects of the current planetary emergency, exploring the theoretical, historical, and practical dimensions of the capitalism’s alteration of the planetary environment, is it possible to develop the ecological and social resources for a new journey of hope.

What people are saying about Capitalism in the Anthropocene

John Bellamy Foster has returned Socialism to a serious and sincere engagement with nature. He is as adept at navigating the latest scientific literature as he is comfortable with the immense body of Marxist theory. JBF is a key reference for the elaboration of our political struggles and for the expansion of our political imagination.

Henri Lefebvre’s Conception of Nature-Society in the Revoltuonary Project of Autogeston
“Introduction” to István Mézáros, “Beyond Leviathan: Critique of the State”