By John Bellamy Foster on November 15, 2017 in Authored, Books 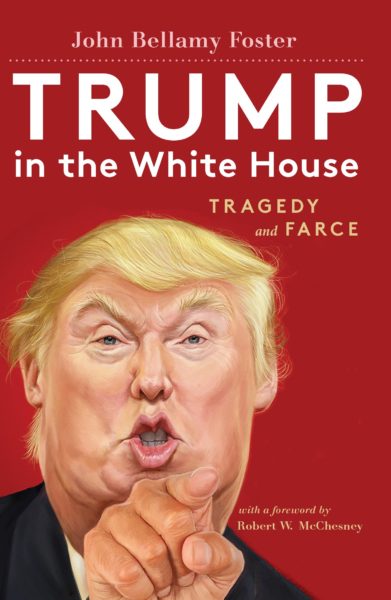 Remember that metaphor about the frog that slowly cooks to death in the pot of increasingly warm water? Leftists have used it for years to describe how people can accept dwindling health care, fading job opportunities, eroding racial and gender equality—as long as the loss occurs gradually. Now, with Donald Trump having slouched off to Washington, most of the mainstream media are working overtime to convince us that we can still stand the heat. Leave it to John Bellamy Foster, one of the world’s outstanding radical scholars, to expose Trump for who and what he is: a neo-fascist. Just at the boiling point, Foster offers us cool logic to comprehend the system that created Trump’s moral and political emergency—and to resist it.

In Trump in the White House, John Bellamy Foster does what no other Trump analyst has done before: he places the president and his administration in full historical context. Foster reveals that Trump is merely the endpoint of a stagnating economic system whose liberal democratic sheen has begun to wear thin. Beneath a veneer of democracy, we see the authoritarian rule that oversees decreasing wages, anti-science and climate-change denialism, a dying public education system, and expanding prisons and military—all powered by a phony populism seething with centuries of racism that never went away.

But Foster refuses to end his book in despair. Inside his analysis is a clarion call to fight back. Protests, popular demands, coalitions: everyone is needed. Change can’t happen without radical, anti-capitalist politics, and Foster demonstrates that—even now, with the waters ever warming—it may yet be possible to stop the desecration of the Earth; to end endless war; to create global solidarity with all oppressed people. Could a frog do that?

By rejecting the term “populism” that is widely used to describe the Trump phenomenon and other similar ones around the globe at present, and using the term “neo-fascism” instead, John Bellamy Foster has done a great theoretical service to the Left. This shift in conceptual perspective prompts him to compare current developments to those in the 1930s, to examine their political economy roots, and to highlight the “destruction of reason” that characterizes all fascism, then and now. This book is a pioneering contribution that is extremely important and valuable.

Disdain for human rights, elections, democracy; hatred of intellectuals, artists and journalists; obsession with power and punishment, with being first and biggest and right; rampant corruption, corporate cronyism, runaway nationalism, racism, homophobia and sexism: the Trump White House is a neo-fascist project. Resistance is possible, but only if we name things for what they are and trace Trumpism to its neoliberal roots. “To see what is in front of one’s nose needs a constant struggle” said Orwell. Lucky for us, John Bellamy Foster is doing the work.

John Bellamy Foster’s Trump in the White House should be read by all those concerned not only about Trump but about the social conditions that produced this phenomenon. No doubt we have reached a stage where democracy has become antithetical to capitalism, where the bosses of the world would rather muffle democratic institutions than allow their property to be touched. JBF goes beneath the surface, demanding that we follow, asking for more radical change than merely the removal of Trump.

—Vijay Prashad, author, The Poorer Nations: A Possible History of the Global South

Informed and informative, thoughtful and thought-provoking, exceptionally well written, organized and presented, Trump in the White House: Tragedy and Farce is unreservedly recommended reading for every citizen and should be a part of every community and academic library Contemporary Political Science collection in general, and Donald Trump supplemental studies reading list in particular.

Praise for The Endless Crisis:

The authors carefully develop a powerful case that the normal state of ‘really existing capitalist economies,’ increasingly dominated by multinational megacorporations along with associated financialization, is not growth with occasional recession, but rather stagnation with occasional escapes that have diminishing prospects. Hence an ‘endless crisis.’… This valuable inquiry should be carefully studied and pondered, and should be taken as an incentive to action.