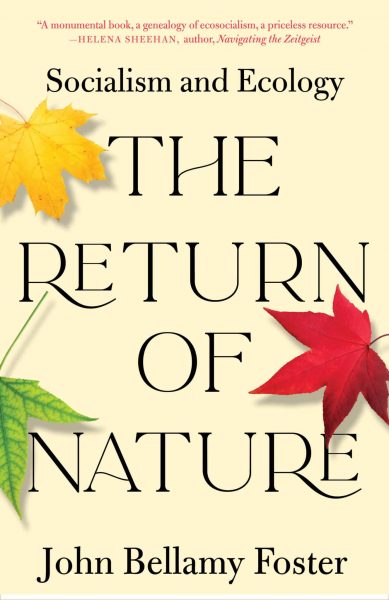 Twenty years ago, John Bellamy Foster’s Marx’s Ecology: Materialism and Natureintroduced a new understanding of Karl Marx’s revolutionary ecological materialism. More than simply a study of Marx, it commenced an intellectual and social history, encompassing thinkers from Epicurus to Darwin, who developed materialist and ecological ideas. Now, with The Return of Nature: Socialism and Ecology, Foster continues this narrative. In so doing, he uncovers a long history of efforts to unite issues of social justice and environmental sustainability that will help us comprehend and counter today’s unprecedented planetary emergencies.

The Return of Nature begins with the deaths of Darwin (1882) and Marx (1883) and moves on until the rise of the ecological age in the 1960s and 1970s. Foster explores how socialist analysts and materialist scientists of various stamps, first in Britain, then the United States, from William Morris and Frederick Engels to Joseph Needham, Rachel Carson, and Stephen Jay Gould, sought to develop a dialectical naturalism, rooted in a critique of capitalism. In the process, he delivers a far-reaching and fascinating reinterpretation of the radical and socialist origins of ecology. Ultimately, what this book asks for is nothing short of revolution: a long, ecological revolution, aimed at making peace with the planet while meeting collective human needs.

In the century following Marx’s death, left-wing scientists and writers made major contributions to the development of modern ecological thought. Foster’s brilliant new book recovers that history, making the work and ideas of those neglected ecosocialist pioneers accessible to the activists who are building today’s movements against global environmental destruction.

What does ecology have to do with a critique of capitalism and a movement for socialism? What are the roots of ecosocialism? For more than twenty years, John Bellamy Foster has engaged in serious thought and massive research, delving into the relation of ecology and socialism, while charting the odyssey of the network of left activist-intellectuals who forged a philosophical-scientific-political vision of our ecosystem and the forces threatening its survival. The result is a monumental book, a genealogy of ecosocialism, a priceless resource for those pursuing this path today.

—Helena Sheehan, author, Marxism and the Philosophy of Science and Navigating the Zeitgeist

Leftists have too readily seen capitalist science and technology’s goal—the domination of nature—as inherently progressive. In The Return of Nature, John Bellamy Foster tells a different story. The recognition that we humans, rather than dominating, are part of nature, both transformed by and transforming it, was central to Marx and Engels’ dialectical thinking. Foster’s richly detailed and ground-breaking history tells the story of the British and American scientists and activists who in the century following Marx’s death, adopted and built on this dialectical tradition, from Engels’ Dialectics of Nature to the fast developing science of ecology and the birth of the radical science movements of the 1970s. A tour de force.

By now, many people will have heard about the ecological ideas of Karl Marx. And everyone knows that the modern environmental movement is filled with anti-capitalist energies. But was there anything in between? In this landmark work, John Bellamy Foster fills in the gap and reconstructs an unbroken genealogy of dialectical thinking about the environment, from the last days of Marx to the first stirrings of Western environmentalism. From the neglected writings of numerous thinkers and scientists—evolutionary biologists, not the least—he reconstructs a treasure trove of ecological insights that will keep scholars and activists preoccupied for years to come. The common knowledge of Marx’s environmentalist leanings derives from Foster’s Marx’s Ecology from 2000. With The Return of Nature, he has given ecological Marxism an epic chronicle that speaks straight to the crises of our times: a sequel and prequel of extraordinary power.

—Andreas Malm, author, Fossil Capital: On the Rise of Steam Power and the Roots of Global Warming

John Bellamy Foster’s magnificent The Return of Nature tells the story of the late nineteenth and early twentieth scientists and other intellectuals who followed paths laid out by Marx and Engels with respect to the profit-driven degradation of the environment and biosphere. Foster convincingly depicts the genesis, in the writings of figures such as William Morris, Joseph Needham, and Rachel Carson, of an ecosocialist vision whose further development represents the best hope of the present period. He helps us answer the question posed by one of the book’s heroes, the novelist and essayist Christopher Caudwell (1907-1937), “How can we think of the future without holding it to our own barrenness?”