By John Bellamy Foster on April 1, 2014 in Authored, Books, Translated 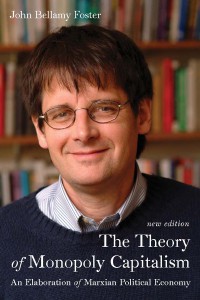 In 1966, Paul Baran and Paul Sweezy published Monopoly Capital, a monumental work of economic theory and social criticism that sought to reveal the basic nature of the capitalism of their time. Their theory, and its continuing elaboration by Sweezy, Harry Magdoff, and others in Monthly Review magazine, influenced generations of radical and heterodox economists. They recognized that Marx’s work was unfinished and itself historically conditioned, and that any attempt to understand capitalism as an evolving phenomenon needed to take changing conditions into account. Having observed the rise of giant monopolistic (or oligopolistic) firms in the twentieth century, they put monopoly capital at the center of their analysis, arguing that the rising surplus such firms accumulated—as a result of their pricing power, massive sales efforts, and other factors—could not be profitably invested back into the economy. Absent any “epoch making innovations” like the automobile or vast new increases in military spending, the result was a general trend toward economic stagnation—a condition that persists, and is increasingly apparent, to this day. Their analysis was also extended to issues of imperialism, or “accumulation on a world scale,” overlapping with the path-breaking work of Samir Amin in particular.

John Bellamy Foster is a leading exponent of this theoretical perspective today, continuing in the tradition of Baran and Sweezy’s Monopoly Capital. This new edition of his essential work, The Theory of Monopoly Capitalism, is a clear and accessible explication of this outlook, brought up to the present, and incorporating an analysis of recently discovered “lost” chapters from Monopoly Capital and correspondence between Baran and Sweezy. It also discusses Magdoff and Sweezy’s analysis of the financialization of the economy in the 1970s, ‘80s, and ‘90s, leading up to the Great Financial Crisis of the opening decade of this century. Foster presents and develops the main arguments of monopoly capital theory, examining its key exponents, and addressing its critics in a way that is thoughtful but rigorous, suspicious of dogma but adamant that the deep-seated problems of today’s monopoly-finance capitalism can only truly be solved in the process of overcoming the system itself.

A clear and powerful explanation of the Marxian political economy, this book is a welcome addition for those who are interested in, or have serious concerns about, monopoly capital as well as economic stagnation, financial instability, and the futures of both capitalism and socialism.

Essential reading for those attracted by the monopoly capital school.

A clear and forceful elaboration of basic Marxist concepts such as economic surplus, capital accumulation, imperialism, and value.

A literate defense of the … Marxian analytical framework of Baran, Sweezy, Kalecki, and Steindl …. Foster develops an improved version of Baran and Sweezy’s … model of of accumulation by adding theoretical refinements.

The Theory of Unequal Ecological Exchange
Stagnation and Financialization