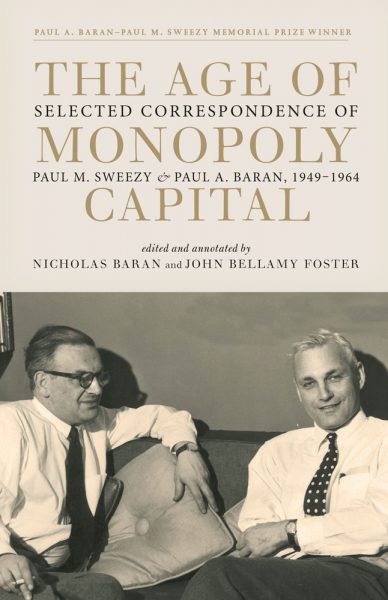 Paul A. Baran and Paul M. Sweezy were two of the leading Marxist economists of the twentieth century. Their seminal work, Monopoly Capital: An Essay on the American Economic and Social Order, published in 1966, two years after Baran’s death, was in many respects the culmination of fifteen years of correspondence between the two, from 1949 to 1964. During those years, Baran, a professor of economics at Stanford, and Sweezy, a former professor of economics at Harvard, then co-editing Monthly Review in New York City, were separated by three thousand miles. Their intellectual collaboration required that they write letters to one another frequently and, in the years closer to 1964, almost daily. Their surviving correspondence consists of some one thousand letters.

The letters selected for this volume illuminate not only the development of the political economy that was to form the basis of Monopoly Capital, but also the historical context—the McCarthy Era, the Cold War, the Cuban Missile Crisis—in which these thinkers were forced to struggle. Not since Marx and Engels carried on their epistolary correspondence has there has been a collection of letters offering such a detailed look at the making of a prescient critique of political economy—and at the historical conditions from which that critique was formed.

The publication of The Age of Monopoly Capital: Selected Correspondence of Paul A. Baran and Paul M. Sweezy, 1949-1964 is a major event. It will allow the public to see a fascinating discussion that clarifies the development of American society.

This collection of the Baran-Sweezy letters provides a timely window into their observations and analyses as they collaborated over fifteen years during the writing of Monopoly Capital. Now, fifty years later, this correspondence offers additional insights that make their political economy critique of monopoly capitalism ever more relevant today. Nicholas Baran, Paul’s son (aided by John Bellamy Foster), has made a wonderful contribution here to keeping his father’s legacy alive.

This rich collection of correspondence between the ‘two Pauls’—Baran and Sweezy—deserves high praise. On one level, it traces the shaping of their classic book, Monopoly Capital, ‘the single most influential book ever published by Marxian political economists in the United States.’ On another level, it is loaded with insights into early Cold War America regarding such topics as Castro’s Cuba, race relations, the dark influences of McCarthyism on academia, and the challenges of founding and maintaining a small, independent, socialist press, Monthly Review, which has provided a forum for such thinkers as Albert Einstein and I.F. Stone. This volume also attests to a remarkable friendship through which two quite different intellectuals traded ideas, always prodding and encouraging each other. The editors—Nicholas Baran and John Bellamy Foster—have done a prodigious amount of work. The result is a model of editing that benefits from explanatory notes, a glossary of names, a meticulous index, and well-written introductions that provide important matters of context. It is exactly the kind of book that researchers will relish and gratefully use.

Informative, insightful, unique, The Age of Monopoly Capital is enhanced for academia with the inclusion of a Chronology, a Bibliography, a Glossary of Names, and an Index, making it an ideal and unreservedly recommended addition to both community and academic library Economics collections.

This Is Not Populism
The Earth-System Emergency and Ecological Civilization: A Marxian View