By John Bellamy Foster on January 1, 2016 in Authored, Books 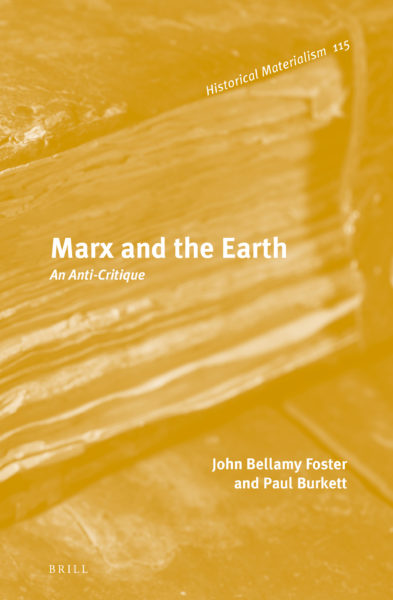 A decade and a half ago John Bellamy Foster and Paul Burkett introduced a new, revolutionary understanding of the ecological foundations of Marx’s thought, demonstrating that Marx’s concepts of the universal metabolism of nature, social metabolism, and metabolic rift prefigured much of modern systems ecology. Ecological relations were shown to be central to Marx’s critique of capitalism, including his value analysis. Now in Marx and the Earth Foster and Burkett expand on this analysis in the process of responding to recent ecosocialist criticisms of Marx. The result is a full-fledged anti-critique—pointing to the crucial roles that dialectics, open-system thermodynamics, intrinsic value, and aesthetic understandings played in the original Marxian critique, holding out the possibility of a new red-green synthesis.